WHO IS ERIC METAXAS?

Eric Metaxas is the #1 New York Times Bestselling author of Bonhoeffer, and many other books, including Is Atheism Dead?, Martin Luther, Amazing Grace, and Letter to the American Church. He has written more than thirty children’s books, including the bestsellers Squanto and the Miracle of Thanksgiving and It’s Time to Sleep, My Love, illustrated by Nancy Tillman. His books have been translated into more than twenty-five languages. He is the host of Socrates in the City, and the nationally syndicated Eric Metaxas Radio Show — “The Show about Everything!” — which also airs as a weekly television program on TBN. Metaxas has conducted interviews with an eclectic mix of guests including film director Ron Howard, Mel Gibson, and Morgan Freeman,  as well as such figures as Peter Thiel. His writing has appeared in the New York Times, The New Yorker, The Atlantic, and many other publications. 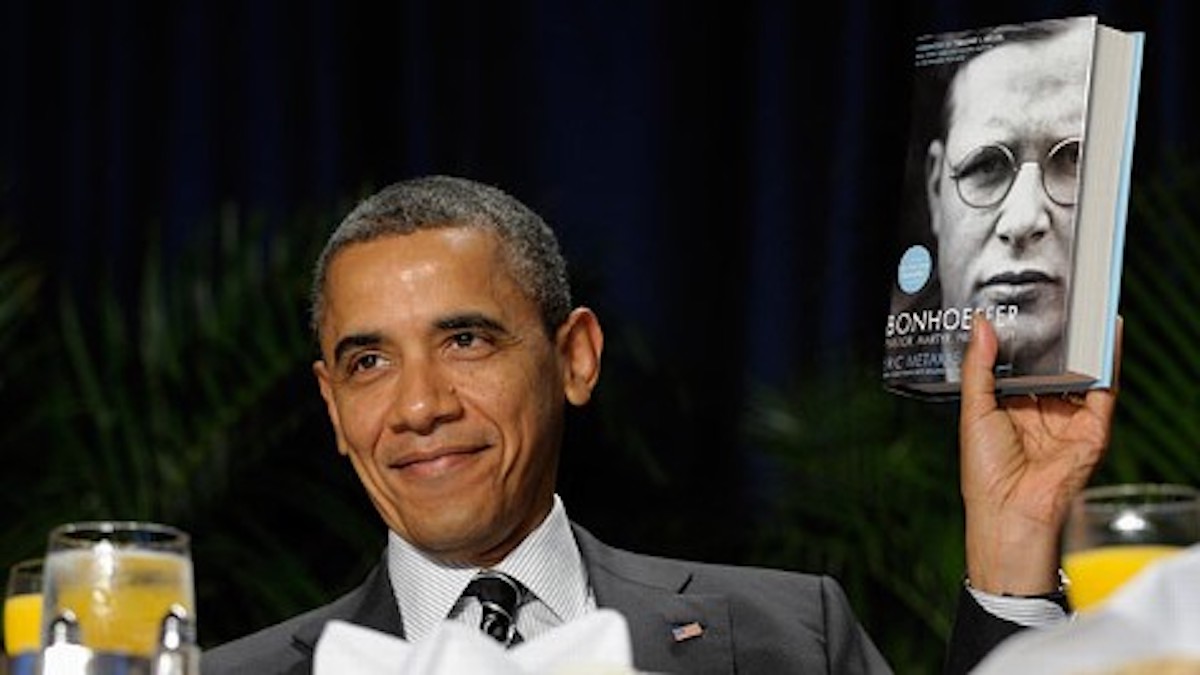 2012 National Prayer Breakfast in Washington DC, an event attended by the President and First Lady, the Vice President, members of Congress, and other U.S. and world leaders.

The Eric Metaxas Radio Show is a nationally syndicated radio program heard in more than 120 cities around the U.S. and airing weekly as a TV show on TBN, featuring in-depth interviews with a wide variety of guests such as Dick Cavett, David Brooks, Kirsten Powers, Kathie Lee Gifford, N. T. Wright, Peter Hitchens (brother of Christopher Hitchens), Jimmie “J.J.” Walker, Andrew Garfield, Maria Butina, Ross Douthat, Tony Shalhoub, Morgan Freeman, Jeff Allen, Senator Rand Paul, Joseph Fiennes, Darryl Strawberry, and Suzy Welch. Metaxas speaks to thousands around the U.S. and internationally each year. He was the keynote speaker at the 2012 National Prayer Breakfast in Washington DC, an event attended by the President and First Lady, the Vice President, members of Congress, and other U.S. and world leaders. Previous keynote speakers have included Mother Theresa, Bono, and Tony Blair. That speech and Eric’s essay on the experience were put into a book, No Pressure, Mr. President: The Power of True Belief in a Time of Crisis.

ABC News has called Metaxas a “photogenic, witty ambassador for faith in public life,” and The Indianapolis Star described him as “a Protestant version of William F. Buckley.” In 2011, Metaxas was the 17th recipient of the Canterbury Medal awarded by the Becket Fund for Religious Freedom. Previous medalists include Mitt Romney, Chuck Colson, and Elie Wiesel. He has testified before Congress about the rise of anti-Semitism in the U.S. and abroad, and spoke at CPAC2013 on the issue of Religious Freedom. In September 2013, Eric and his wife Susanne were jointly awarded the Human Life Review’s “Great Defender of Life Award.” Metaxas has been awarded honorary Doctorates from Hillsdale College, Liberty University and Sewanee: The University of the South.

Bonhoeffer was named “Book of the Year” by the ECPA. Bonhoeffer also won the 2011 John C. Pollock Award for Biography awarded by Beeson Divinity School and a 2011 Christopher Award in the Non-fiction category. Called a “biography of uncommon power,” Bonhoeffer appeared on numerous 2010 “Best of the Year” lists and was featured in the Wall Street Journal, Publishers Weekly, The New Republic, Harper’s, Kirkus (starred review), NPR, FoxNews, C-SPAN’s Book TV, Christianity Today, The Weekly Standard, and First Things. Bonhoeffer has sold more than one million copies and has been translated into 25 languages. It was ranked #21 on the Amazon.com listing of Most Highlighted Books of all time. Miracles: What They Are, Why They Happen, and How They Can Change Your Life hit #12 on the New York Times Bestseller list and is being translated into German, Polish, Greek, Portuguese, Hungarian, Romanian, Russian, Estonian, Slovak, Korean, Swedish, Finnish, and Croatian.

Eric Metaxas was born in New York City in 1963, on his father’s 36th birthday. He grew up in Danbury, Connecticut, attending the public schools there, and graduated from Yale University. At Yale he made a literary splash as editor of the Yale Record, the nation’s oldest college humor magazine, and a subsequent literal splash when, following the 99th Yale-Harvard Game, he commandeered a successful effort to throw Harvard’s goalpost into the Charles. At graduation Eric was awarded two senior prizes for his undergraduate fiction. He was also “Class Day Speaker,” co-writing and -delivering “The Class History,” a satirical address that is a Yale commencement tradition, in the process upstaging Dick Cavett, the next speaker. They would not speak for nearly two decades.

“…a photogenic, witty ambassador for faith in public life…”

In a decidedly eclectic career, Eric Metaxas has written for VeggieTales, Chuck Colson, and the New York Times, three things not ordinarily found in the same sentence. He is a best-selling author whose biographies, children’s books, and works of popular apologetics have been translated into more than 20 languages — German, Albanian, Portuguese, Spanish, Korean, Turkish, Galician, French, Simple Chinese, Complex Chinese, Dutch, Danish, Italian, Polish, Hungarian, Russian, Ukrainian, Finnish, Norwegian, Swedish, Macedonian, Slovak, and Greek. The Hartford Courant has declared figuring him out “like trying to stick a pushpin in a cyclone.”

Metaxas’ humor writing was first published in the Atlantic Monthly, and has appeared in The New York Times. Woody Allen has called these pieces “quite funny.” Eric’s book and movie reviews, essays, and poetry have appeared in The New York Times, The New Yorker, The Washington Post, Christianity Today, National Review, and First Things. He has been awarded fellowships to Yaddo and the MacDowell Colony for his short stories. His cult-classic Don’t You Believe It! — a book-length parody of the Ripley’s “Believe It Or Not!” books — led novelist Mark Helprin to dub Metaxas “the true heir to the Far Side’s Gary Larson.”

Mr. Metaxas’ The Birthday ABC was chosen as a 1995 “Pick of the List” by the American Bookseller’s Association. Reviewers said the book’s light verse “sparkled” and “sizzled,” comparing it with Odgen Nash, Edward Lear, and Lewis Carroll. Eric’s many other children’s books include the Angel Award-winning Prince of Egypt A to Z, a tie-in to the Dreamworks film; and the acclaimed Uncle Mugsy & the Terrible Twins of Christmas. Squanto and the Miracle of Thanksgiving was awarded an Amazon.com “Number One Bestseller” Award in 1999.

Eric’s children’s book, It’s Time to Sleep, My Love, illustrated by Nancy Tillman was hailed as a “Goodnight Moon for the 21st century.” Sally Taylor, the daughter of James Taylor and Carly Simon, wrote a lullabye song to Eric’s words, and sings it on the book’s audio cd. The book has sold more than 800,000 copies.

From 1997-1999, Metaxas was a writer and editor for Chuck Colson’s BreakPoint. He then worked as a writer for VeggieTales, where he co-wrote Lyle the Kindly Viking, and provided the voice of the narrator on Esther. In 3-2-1 Penguins! he provided the voice for “President Wait-Your-Turn” and “Vacuum #10.” Eric’s children’s books for VeggieTales include the #1 bestseller God Made You Special! (over 800,000 copies in print), as well as Even Fish Slappers Deserve a Second-Chance and The Pirates Who (Usually) Don’t Do Anything, both also bestsellers. He is the author of the unproduced Gourd of the Baskervilles and an unproduced VeggieBook, The Boy Who Cried Waffle.

Metaxas has been featured as a cultural commentator on CNN, MSNBC, and the Fox News Channel; and has discussed his own books on The History Channel, C-SPAN, Glenn Beck, Huckabee, and RedEye. He has been featured on many radio programs, including NPR’s Morning Edition, and Talk of the Nation, as well as Hugh Hewitt, Dennis Prager, Bill Bennett, and The Alan Colmes Show.

Metaxas speaks and travels widely. He has spoken in the UK, Germany, Switzerland, Austria, Canada, Bermuda, Albania, Kosovo, Greece, and Australia; and in the U.S. has spoken at the White House, on Capitol Hill, at West Point, Yale, Cornell, Princeton, and at many colleges and universities. In May 2013, Metaxas was the featured speaker at the Canadian National Prayer Breakfast in Ottawa. He was the commencement speaker at Palm Beach Atlantic University in 2013. In May 2014 he was the commencement speaker at Hillsdale College and Baccalaureate speaker at Liberty University.

He has debated at the Oxford Union, the world’s oldest debating society. His no-holds-barred introductions of such figures as U.S. Senator Joseph Lieberman, former Attorney General John Ashcroft, and Rick Warren have made him much sought after as an emcee and moderator. Metaxas has moderated debates featuring President Obama’s former pastor, the Rev. Jeremiah Wright; Bishop John Spong; Princeton’s Peter Singer; Dinesh D’Souza, and the New Testament scholar Bart Ehrman.

Eric’s biography, Amazing Grace: William Wilberforce and the Heroic Campaign to End Slavery was published by HarperOne, and was the “official companion book” to the feature film, also titled Amazing Grace. The book appeared on the New York Times bestseller list, and was lauded by Stanley Crouch (“…a superb history of the British fight against slavery”); former NYC Congressman Floyd Flake (“magnificent… will stand as a living landmark…”); John Wilson (“a crackling bonfire of clarity and truth.”); Rudy Giuliani (“better than the movie!”); and many others.

Eric lives in Manhattan, New York, with his wife and daughter.